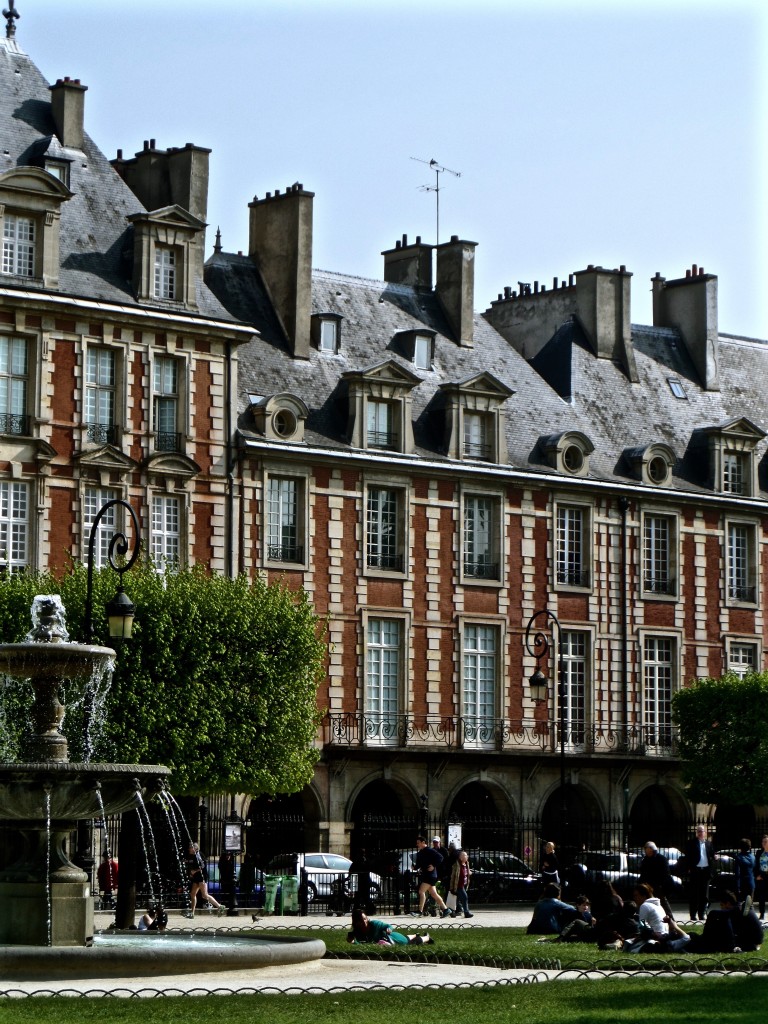 Tranquil, harmonious, urbane. The Place des Vosges is both active and peaceful, a remarkable achievement in a city square. Henry IV (1553-1610) envisioned a new type of urban environment to enliven and beautify his capital. “Good King Henry” announced by royal edict in 1605 his intention to endow Paris with a place to serve as “a promenade for the inhabitants of our city.”

Originally named the Place Royale, Henry IV’s scheme centered on an open space in the form of a square surrounded by houses of uniform height and materials. Red brick, sandstone blocks, iron balconies and blue slate tile roofs create a visually harmonious effect. The first level of the houses was comprised of stone arcades sheltering a variety of shops and allowing visitors to stroll and engage in that most important of fashionable urban pastimes, looking at each other’s clothing. 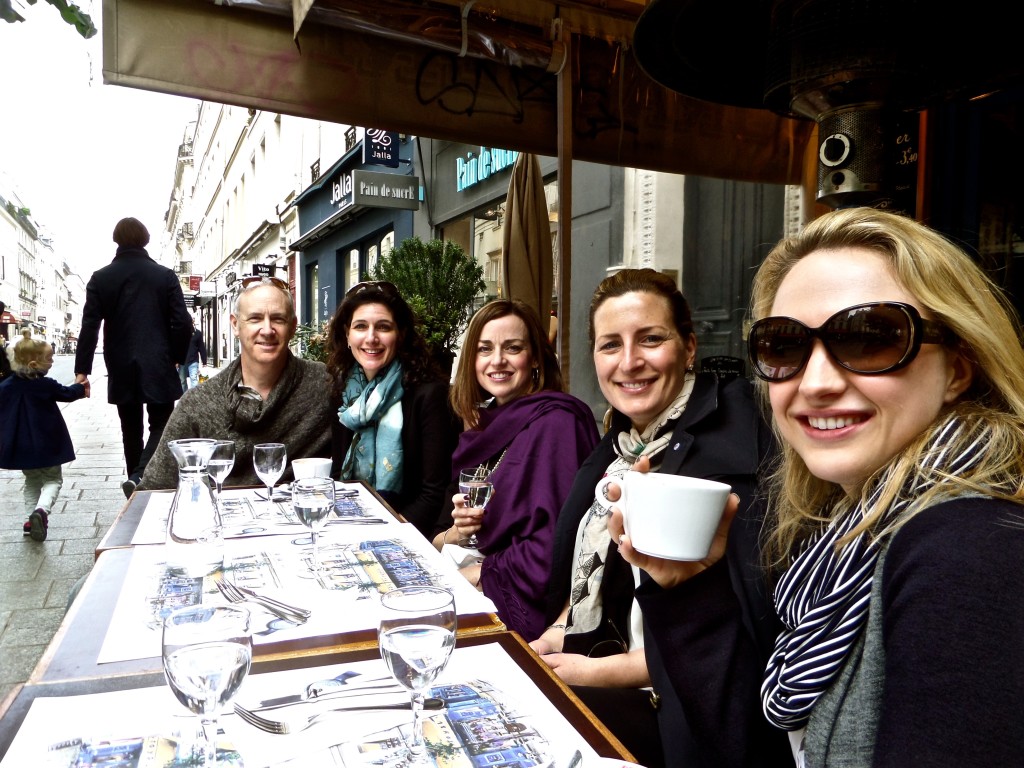 LUNCH NEAR THE PLACE DES VOSGE WITH GRADUATES FROM MY RHODE ISLAND SCHOOL OF DESIGN CE COURSE IN DESIGN HISTORY. PHOTO: JOHN TSCHIRCH

The Place Royale signaled the arrival of the rational principles of Renaissance urban planning in Paris, which up to this point had been an intricate maze of Medieval streets and dark alleyways. Light filled and spacious, the new “place” allowed for a new kind of elegant public life in cities. With classic French restraint and an eye for scale and proportion, the Place Royale became the model for succeeding squares in the city and beyond. 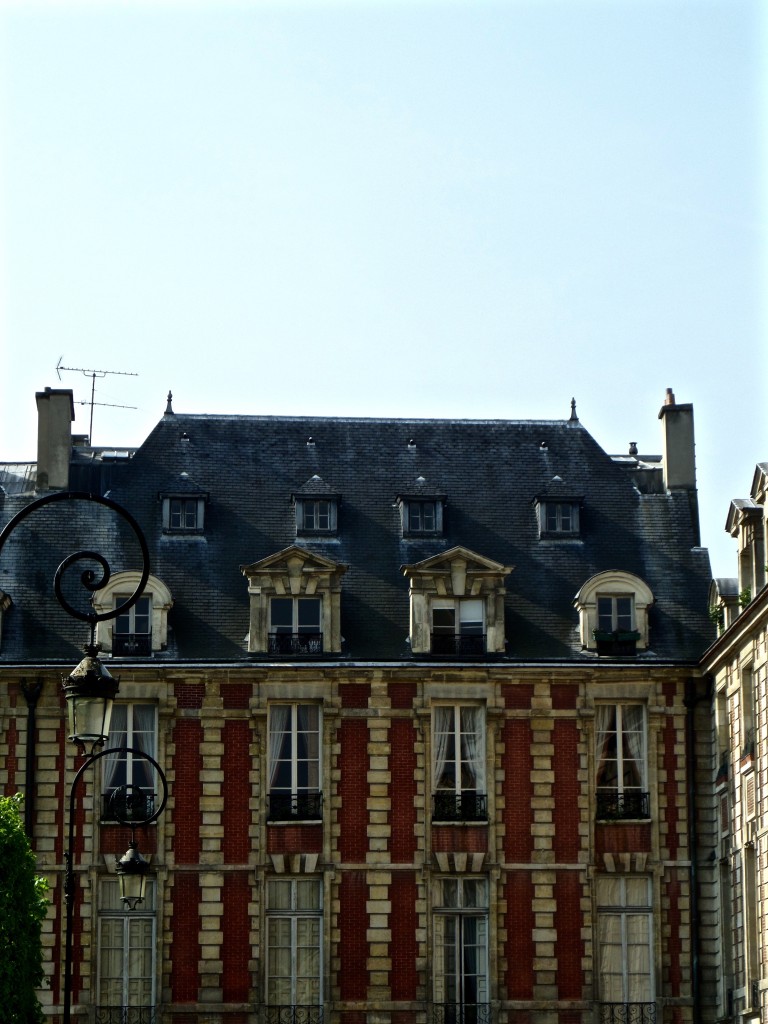 THE RED BRICK WALLS, SANDSTONE BLOCKS, KNOWN AS “QUOINS,” AND BLUE SLATE ROOFS WERE THE BASIS FOR THE TYPE OF RESIDENCE PERFECTED IN 17TH CENTURY FRANCE. PHOTO: JOHN TSCHIRCH 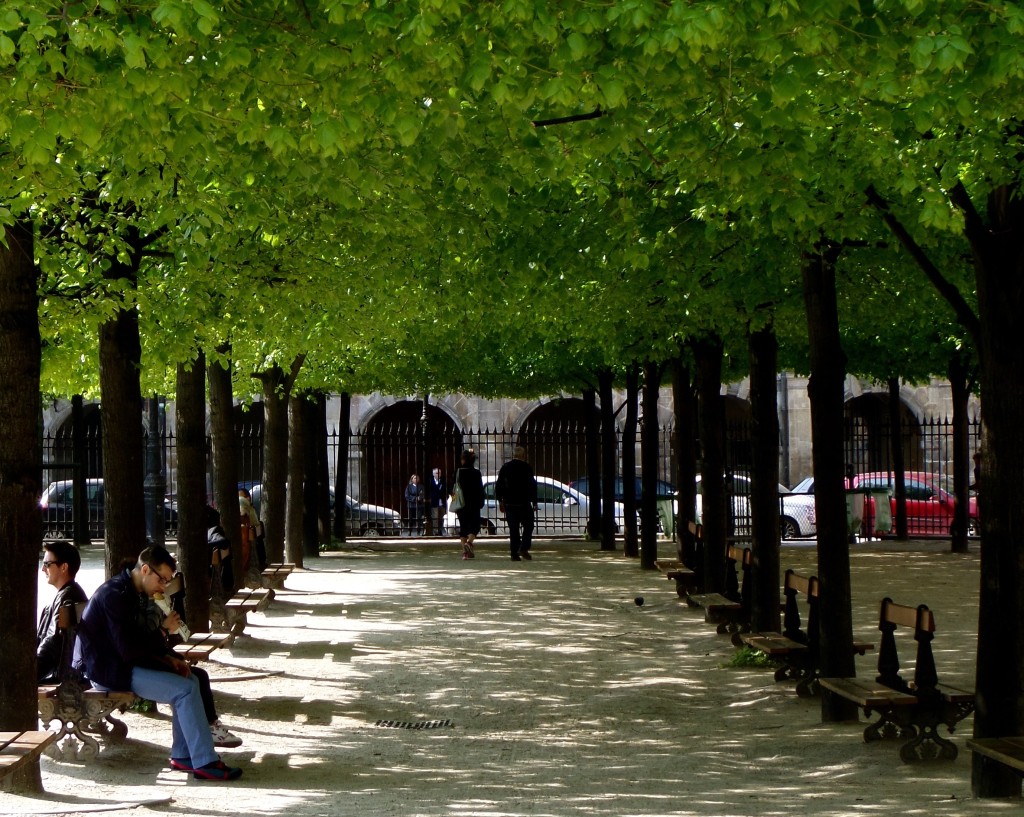 THE SHADED CANOPY OF CLIPPED TREES IN THE CENTER OF THE PLACE DES VOSGES. PHOTO: JOHN TSCHIRCH

Assassinated in 1610, Henry IV never saw his finished square. His son, Louis XIII, inaugurated its completion in 1612 with a magnificent carrousel (a horse parade) to celebrate his wedding to Anne of Austria. Located in the center of the Marais District, the square became the heart of fashionable life. Among its famous residents were the Duke de Sully (1559-1641), minister to Henry IV, Cardinal Richelieu (1607-1624), the all powerful chief minister of Louis XIII, the writers Madame de Sevigne (1626-1696) and Victor Hugo (1802-1885) and the poet, Theophile Gautier (1811-1872). After the French Revolution, the government purged the square its royal associations by renaming it after the Vosges region, the first to pay tax to support the Revolutionary army.

EACH RED BRICK HOUSE CONSISTS OF A FIRST FLOOR ARCADE LEADING TO SHOPS. ABOVE THE ARCADES ARE THE MAIN FLOORS OF THE RESIDENCE WITH TALL WINDOWS FACED WITH IRON BALCONIES. THE BEAUTY OF THE SQUARE IS IN ITS CONSISTENCY. THE MATCHING COLOR OF RED BRICK AND SANDSTONE VISUALLY UNIFY THE ENTIRE ENSEMBLE. PHOTO: JOHN TSCHIRCH