THE GARLAND OF JULIE FRONTISPIECE

The art and science of horticulture significantly expanded during the 17th and 18th centuries. Spurred on by global exploration and trade, new plant specimens made their way to the cities and royal courts of Europe. Painting, garden design, architecture, textiles, illustration art and numerous other art forms were influenced by the new passion for flowers.

In 1641, a legendary work appeared in Paris entitled The Garland of Julie, featuring 29 madrigals each accompanied by an exquisitely rendered painting of a flower. The front of the book displayed a garland of popular blooms, including roses, tulips, anemones and narcissi. Nicholas Robert executed the floral paintings while Nicholas Jarry produced the calligraphy for each poem. Bound in red Moroccan leather, scented with perfume and placed in a walnut case, the precious manuscript was delivered to its intended recipient.

Julie d’Angennes, the daughter of the renowned literary hostess, the Marquise de Rambouillet, was the subject of the Garland. She had been courted for over 15 years by Charles de Saint Maure, Marquis de Montausier, a brave soldier but a rather ineffective suitor until struck by a brilliant idea. Flowers would be his language of love. He commissioned several accomplished poets to write madrigals of a flowers which would represent the inner and outer beauty of Julie. After the artists, Robert and Jarry, completed work on the book, it was left at Julie’s residence.  Constant devotion and dogged determination appeared to work. Julie accepted de Montausier’s proposal of marriage. They were finally wed in July of 1645.

The Garland of Julie achieved instant fame among the fashionable world of Paris. Today, the book is a revered treasure in the collection of the French National Library.

Look for more detail on The Garland of Julie, which features prominently in my historical fiction novel, Beauty’s Hero: The Story Behind the Tale of Sleeping Beauty, to be published in the Spring of 2016. 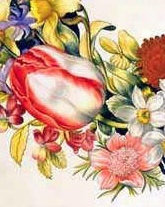 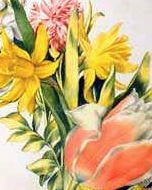 IMAGES: DETAILS OF THE GARLAND OF JULIE. COURTESY OF WIKIPEDIA

IMAGE: DETAIL OF THE GARLAND OF JULIE. COURTESY OF WIKIPEDIA